Although my wife is a kind soul that thinks about everyone’s well-being, and because of that we almost caused some Halloween 2016 problems.

We’re not Halloween planner people, we run down the night before or day off and stock up on candy. Don’t ask about costumes. Anyway, we go to Target and my wife orders which bags of candy we should buy like a general doling out orders on a surgical strike mission, “Two bags of those, One bag of those -” When we got to the checkout, the total was – $80!

What? I could buy 1 1/3 video games for that! I said, “Uh, honey. That’s a lot of money for Halloween candy, don’t you think?” She responded, “We have a responsibility to the kids of the neighborhood to make their Halloween memorable, right? We don’t have kids, so – for tonight – these are our kids!”. I didn’t want to challenge my wife at Target because I’m pretty sure I told the Security Guard person a corny joke (that they didn’t enjoy) one time and I wasn’t exactly sure that the Security Guard person would come to my aid if I got in over my head. So, I let it go and paid it forward. I hope the XBox and Playstation people are reading this and pay some video game goodness forward to me soon – very soon. 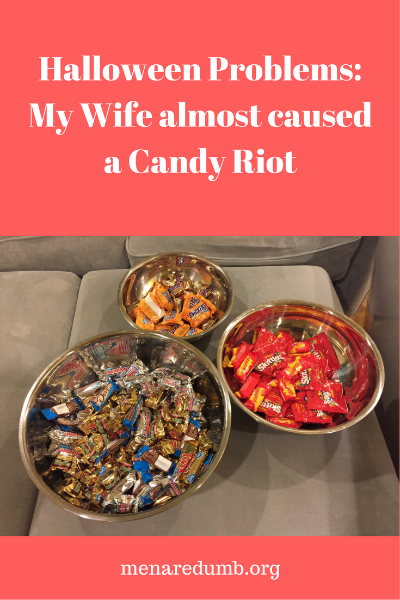 We have a long-haired female dachshund dog that thinks she is the size of Cujo. She is our protector, and we penned her in so she would run out the door and licked our costumed guests to death.

My wife was in the back of the house “getting ready”. I don’t know what ‘getting ready’ entails, but she was deep in the throws of it and I was at the other end of the house to wonder what she was doing and to get my side of the house ready, as well. In our house, I have been taught that you just can’t rip open a bag of candy and distribute from there. Nope, you need to pour the candy from the bag to another dish (That will need to be washed by me) to be handed out to the children. I don’t argue anymore, I just grab a silver bowl.

“Honey, we’re ready,” I shouted to the other end of the house.
“Really?” My wife reluctantly responded as entered the front room to model her “Candy handing out costume”.
She was dressed at ‘Minnie Mouse’. I couldn’t guess just by looking at it. She had to tell me.
“Where are the other bowls,” my wife asked.
“Still in the cupboard”
“Sigh. Let me explain. We bought three types of candy, depending on if some children have food allergies”
“Really honey?”
“Yes *honey*, This is the “Chocolate with nuts” bowl, this is the “Chocolate without nuts” bowl and this is the non-Chocolate candy bowl”
“We are good parents, even of we don’t have kids” I still didn’t get it, but I figured I’d say some platitude that would make her feel good about the 1 1/3 video game she deprived me of.
“Well,” she smiled, “I’m glad we’re on the same page, then.”

The Arrival of the Kids

I unscrewed our porch light, so we could eat our dinner in peace, then I screwed it back in when we were ready for the throngs of children that would arrive.

My wife opened the door to a group of costumed children and my wife asked one of them, “Well, who are you supposed to be?” 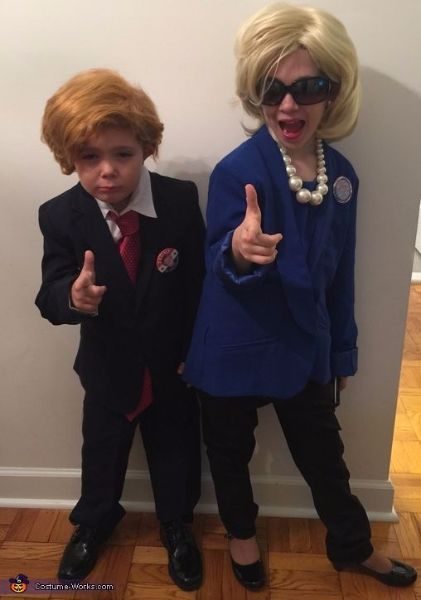 “I’m dressed as Donald Trump. Obviously, the winner of the costumes tonight – they rest of the costumes here are just a disaster.”
“I’m dressed as Hillary Clinton and I obviously disagree with him.”
“Nice pantsuit, Hillary. Who are the rest of you?” my wife asked.
“I’m Taylor Swift – and this is my boyfriend, Thomas.”
“Thomas, don’t get too attached to Taylor because she doesn’t have a very good track record with keeping – ” my wife tried to explain to Thomas.
“Shhh. Don’t spoil the surprise,” Taylor interrupted my wife.
“What about the rest of you?” my wife asked.
“Sarah Palin right here, you betcha. If the Donald or Hillary causes any more Halloween 2016 problems, I’ll fix them. If I can’t, then Bristol will do some ballroom dancing.”
“Angelina Jolie, here. If any of you see Brad, let him know it’s still over.”
“Tell Brad I *may* be single in a day or two,” Taylor Swift said.
“What???” Thomas asked.
“I was kidding Thomas (She mouthed “I’m so not kidding, Brad” to the costumed Brad Pitt standing on the curb)”

What are the secret messages behind the way men reply to women’s facebook pictures?

“Who has peanut allergies?”
“I don’t have any allergies. I’m not afraid of any allergies. I’ll just build a wall around me to keep them out. Hand me the peanut candy.”
“Me first. This campaign with Donald has been nuts most of the time, so I’m used to it.
my wife handed the costumed Presidential nominees some Chocolate candy with nuts and they left fighting all the way to the next house yelling, “You’re a puppet,” “No! You’re a puppet!” 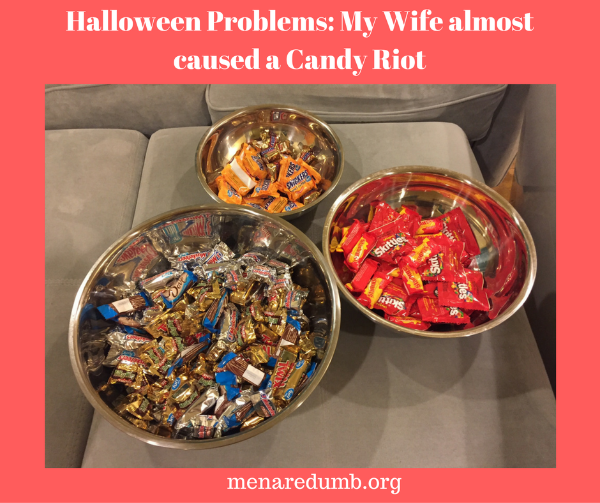 “Wow, Donald and Hillary took all the good candy!!!” Taylor whined.
“Taylor, shake it off. Here are some good candies,” my wife replied.
“Yea, but I wanted theirs!!!” Taylor whined more.
“Are you taking notes, Thomas?” my wife asked Thomas.
“But she’s so pretty…” Thomas replied.
“Thomas, go get me Donald’s candy! Now!” Taylor demanded.
“Yes, my love! Hillary, want to help me?” Thomas said running after Donald.

Why do women have SO MANY pillows on the bed?

“Who wants non-peanut candy?” my wife asked.
“Brad can have mine. I need to watch my figure,” Angelina left with all of her costumed children with her.

Happy Halloween, all. What was your trick or treating like?