Life is all about taking risks. I ventured in where men aren’t supposed to go and faced mysteries from the kitchen drawers and found some kind of a kitchen weapon. I’m not sure if my wife was going to use it on me (After the TV Remote incident) or on someone or something breaking into the house.

Mysteries from the Kitchen Drawers

Research on this ‘kitchen weapon’

I’m a pretty smart guy, but this instrument had me baffled from the minute I laid eyes on it. I’ve seen lots of movies, watched most documentaries on Netflix, watched Jeopardy and even graduated from college, but I still can’t figure out what this is.

We all know that the French knew their way around torture, so maybe this is some kind of French torture device? Maybe they used this if the guillotine got stuck, and then real medieval stuff would have really started to go down. I love many of the gifts that France have given us; French Fries, French Kissing and the Statue of Liberty, if this strange device is from the ‘french wife torturing her husband collection’, I am against it.

I’ve seen Star Wars and Star Trek many times (Star Wars is better, except for the prequels.) and I’m aware that in space there are many nasty creatures that you need to defend yourselves against. Is it some kind of weapon to;

Destroy a Dalek?
Mix it up with a Martian?
Smite a Cyclops?
Gouge a Gorn?

What is with all the pillows that Females have on their bed? Why are there so many???

Whatever it is, I hope it can repel High School kids selling magazine subscriptions door to door. They’re worse than the Daleks.

A weapon to defend against three attackers from three different directions?

A key to something in The Fifth Element movie?

Have you seen this? How men comment on pictures of females on Facebook and what it REALLY means.

A hammer that can drive in 20 very, very tiny nails at the same time? 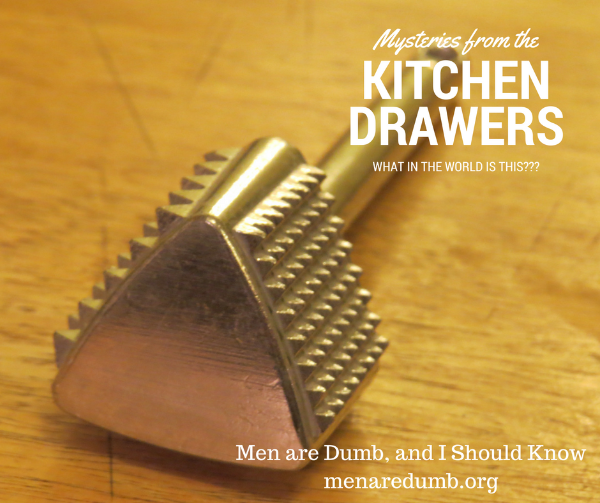 So, those are my summations of what this strange apparatus in, but what do you think? What is this crazy looking kitchen weapon lurking in our kitchen drawer? Leave a comment below and let us know.