What if We Had a Ghost in our House?

If we had a ghost in our house, we would have a much different life, I’m sure of it. We searched long and hard for the right house. The perfect house. A house without neighbors that didn’t cook meth, clog dance for a living or build a full-scale ark (with animals in it) in their backyard. We wanted to make sure the house was perfect for us. We are DINKs, so we didn’t worry about schools, except when they are near our house and the little tykes that cross the streets might make us late for work. That could be a problem. Anyway, when we decided to buy the house, it was a huge, important decision – like whether to buy an XboxOne or a PS4. 🙂

After all, that, if we heard strange noises or bumps in the night – we would handle it differently than most people.

How most people deal with ghosts in their house

Who you gonna call?

With so many paranormal activity Investigators around (some with Reality TV shows, some without), it would be pretty easy to contact a group that will look into your apparition. I know one of the ladies on the Paranormal Housewives, so say ‘hey’ to Erin if you contact them.

Make money from the ghost

Some hotels or other types of businesses build in the ‘ghost story’ into their story. The Queen Mary or the Hotel Del Coronado, for example. We’ve stayed in both. The only thing that really scared me was not the ghosts, but the final bill.

How we would handle a ghost in our house

Our Ghost Better Be Mute

My wife doesn’t think most of my jokes are funny, so I live my life under the delusion that everyone except for my wife will think I’m the next Jerry Seinfeld (or Carrot Top). I’m always looking for someone to hone my next stand up comedy set, so the millisecond I hear anything that isn’t; me, my wife, any of our electronic devices or the dog – that ghost will be my joke ghost ‘ghost’ writer forever. That will be a fate worse than wandering our house in limbo trying to go toward the light – believe me.

Me “So, Bob Dylan, Neil Young and Bruce Springsteen try out for the “X-Factor”
Ghost “You told me this joke before.”
Me “No, the punch line is different this time. It has nothing to do with William Hung or X-Rated movies”
Ghost “Dude, I’m kinda busy. It’s time for me moan woefully and turn the lights on and off scarily.”
Me “Look, whatever. If you wake up the dog at 1:30AM again, you’ll wish you would’ve stayed alive.”
Ghost “I already do”
Me “What Casper? What?”
Ghost “You are cold.”
Me “Right, now let’s go over my political jokes, Sarah Palin is on Jeopardy, see” 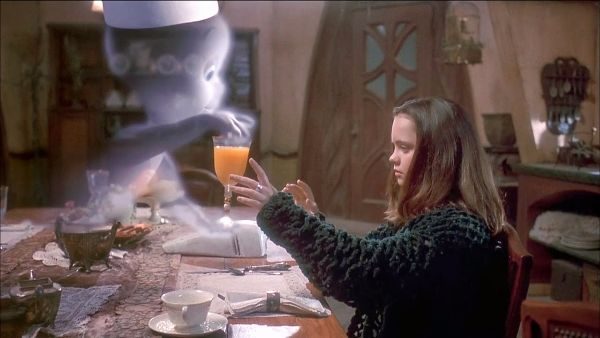 Since we don’t have children, our ghost would be our child/Siri app.

Me “Spectre?”
Ghost “Yes?”
Me “Where is the TV remote?”
Ghost “Sigh. Under the pillow on the couch, if it was a snake it would have”
Me “No commentary, just answers.”
Ghost “As you wish”
Me “That reminds me, can you grant wishes?”
Ghost “I’m NOT a Genie, but I have do have a wish”
Me “No time for that. Where are my car keys?”
Ghost “Sigh”

The Other Side of the Knock Knock Jokes

We would have to take our ghost through the (cue the Rocky training montage music) Phantasm Olympic Training. Sure, a ghost can rattle chains, doorknobs, open and close doors, but there are more things a ghost needs to learn to “earn a living (See what I did there?)” with us. A ghost would need to learn to interact with the physical realm, like;

Walking the dog,
Taking the dog potty,
Dealing with Telemarketers on the phone,
Dealing with religious people and teenagers selling magazine subscriptions coming to the door,
Washing windows,
Putting all the loose DVDs back in the right case,
Sending ‘Thank You’ notes to the people that gave us gifts on our wedding – 17 years ago,
Cleaning the bathroom,
and so much more. 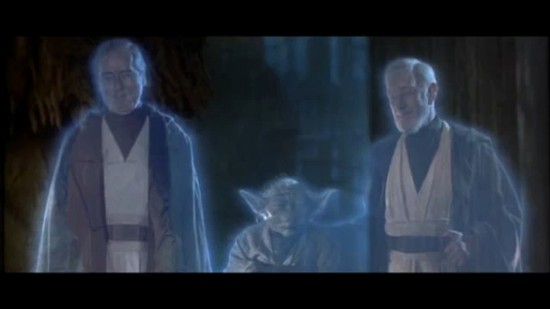 There are always “those houses” in the neighborhood that always do holiday decorating events like a boss, but when we have our newly beloved banshee – Halloween will now be ours. It will all begin when the kids start down the walkway toward our house, they would hear a moan and laughter. As the kids came up the stairs, our front door would fling open and a cold wind would fly out and our luminescent ghost host would say, “Who has disturbed my slumber?” with accompanying thunder and lightning. It would be great, but then I would have a word with our ghostly star and review my director’s notes,

Me “I told you, don’t fling open the door with the cold wind until the first child steps on the *second* step, not the first step.”
Ghost “But, I thought you said ‘the first step'”
Me “We went through this in rehearsal. I thought you were ready”
Ghost “I’ll get it next time”
Me “I hope so. Oh and pull it back a little, we don’t mind kids wetting their pants, but one threw up last time. Unless you want to clean it up.”
Ghost “Nope. Pull it back a little, okay. Got it.”

If the Wraith won’t cooperate

If we can’t find a new revenue stream with our ghostly interloper, there’s really only one thing to do – get on the speaker phone with my Mom’s Bible Study group and kick that sucker out.

As we have shown, there are many ways to handle it if we found a Ghost in our house, but what would you do?