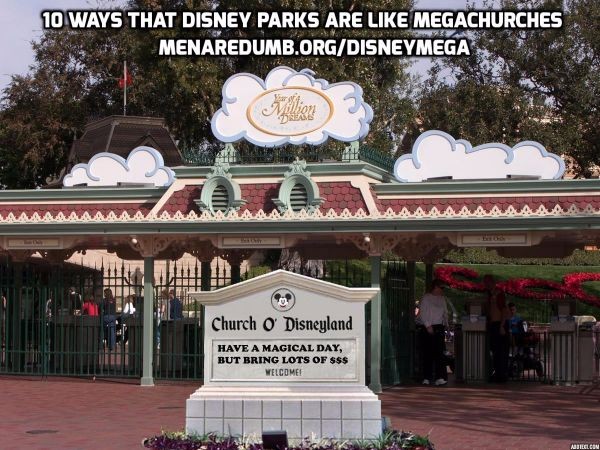 In my years of being a Disney Park “fan”, I have learned that I’m lower on the fan scale than I thought. There are other fans that are Super-Duper-Duper fans (and shockingly – some of those people don’t even blog or host a podcast about Disney at all), and in processing that and all the parts involved with being a Disney Park fan in 2015, it reminded me of another group of people with a shared interest.

I mean, think about it.

So, without further ado, here are

1. Everyone has a “testimony” of how visiting a Disney park for the first time changed their life,

2. Attendees pay to support the building projects, etc., even though they don’t want to,

3. There is singing. Lot’s of singing. Some dancing, but no snake handling,

4. They serve coffee. Lots of coffee,

5. Attendees wear all the tchotchkes (all of them) to be cool. People ask, “Hey, is that the new 2016 pendant/button/shirt with an embroidered meaningful emblem/iPhone cover, etc.? Oh wow, where do I get one of those?” :They smile on the outside, but jealously grumbling on the inside that they don’t have it already:

6. Even though attendees should be joyful (or dare I say happy) to be there, they: grumble, frown, cry, throw a fit (kids, too) and complain (“The music’s too loud”, “It’s too hot or too cold”, “I walked across two continents to get here”, etc.),

7. Attendees get tired of standing (or other physical activity) during their time there, and wish they could just stay seated for an extended period of time,

8. Attendees are around people they *should* like (because they all “love” the same things), but don’t,

9. Some attendees get there REALLY early to get a good seat (or a place to stand) and some people get there late and grumble about the place in the back where they can’t see everything that the “early birds” can see,

10. There are statues that represent revered people that attendees must spend time at (or take selfies),

Extra one just for you

11. There are different kinds of “believers”;

That’s why I think Disney Parks are like Megachurches, but what do you think?

I’ll bet I left some things out, but you can add them in the comments below, right?